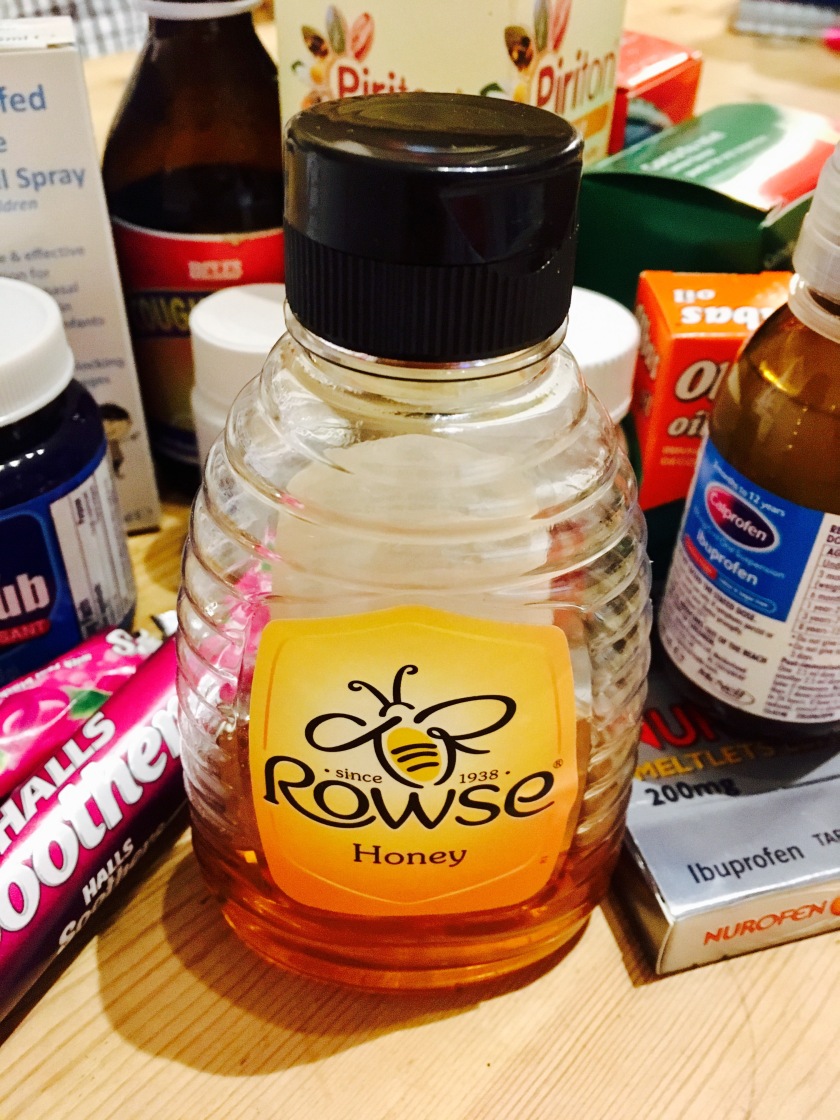 The Girl got a cold. She attended preschool which is just an enormous incubator for germ proliferation.  The children were then released, the perfect vectors for disease, swarming in to their native environments to share their overflowing Petri dishes.
And share she did.

﻿Her affectionate cuddles were just a snot smearing exercise, her attempts to cover her mouth when coughing did nothing but create a wind tunnel to direct phlegm towards the uninfected, and her sneezes were like a glorious fountain of misery.

Phil succumbed first. So he was banished to the spare room for a night in an attempt to isolate and limit the spread of disease, as well as to facilitate a good nights sleep in an effort to rid himself of the lurgy ASAP. It didn’t work. But did mean that I had a night of responding to both children’s needs and guaranteeing that I was so run down I also contracted the disease.

So, now the household is riddled with disease. Phil has taken his to work, filling his surgical mask with snot while operating (fear not, the operating field remained sterile). The Girl, after a few days off, returned to the incubator to no doubt pick up another one to follow. The Boy, is producing such vast quantities of snot his cot sheets need changing like nappies, his dummy gets fired out of his mouth with each cough and the battle of the dummy vs breathing ensures that sleeping is nothing but a pipe dream.

And me, I have The Mum Cold. The snot is torrential and my time is spent trying to catch it before it lands on a child or soft furnishing. Tissues are always slightly out of reach to me- but obviously not to The Boy who is frequently found trying to get a snot rag into his mouth.

The cough is guaranteed to happen just as The Boy is falling asleep and will therefore startle him ensuring he will be awake for another hour, making sure that I maintain my sleep deprived state, prolonging the agony. At this point I’m grateful to be married to a urologist who has been only to happy to remind me to perform my pelvic floor exercises, and back up his “friendly” reminders with tales of incontinence and intimate medical investigations. So at least I’m not peeing myself too- bonus.

The main challenge of The Mum Cold is the lack of day off or recuperation. Phil has delivered me a honey and lemon (pretty sure this is not evidenced based medicine) and toddled off to work. I drag my aching carcass out of bed to get breakfast which turns into some sort of porridge and snot wrestling championship, and get The Girl to preschool. The cupboards are barren, there is not a vitamin in sight and the only paracetamol has decongestant added to it, which was great for The Man Cold but apparently not ideal for my lactating knockers.

So we venture to the supermarket, without a list or a meal plan and my current state of mind means that I spend a fortune – on nothing much and far too many “treats”. The diet is screwed but that’s a worry for another day. Right now I need to work out what I’m feeding the children, how I’m going to clean up the kitchen and remove the porridge which had been sprayed so liberally on the walls it looks like we have textured wallpaper, and how I can possibly create a team nap environment this afternoon.

There is no team nap. Instead we are all sneezing so vigorously our sofa resembles the bellagio fountains, in a sea of snotty tissues, with a cough ensemble backing track.

Phil is welcomed home to the disease ridden house by shrieks of joy from The Girl, and a huge snotty grin from The Boy (a welcome but brief pause in the whining) and me, un-showered, stinking of Vicks and olbas oil and wearing clothes covered in snail trails of snot.

Phil looks at me and clearly my face says it all. He knows his working day is not done, he has done 12 hours but there’s another 12 in the day. He has returned to 3 more patients. Phil is clearly still not feeling great but makes a great decision. Without out me saying a word he, decides on balance that struggling through bath time (without his surgical mask, so improvising with tissue shoved up his nostrils) is far preferable to the exhausted, hormonal, diseased, has-spent-all-day-being-mauled-by-children, outburst that will follow if he even sneezes in a manner suggesting he isn’t going to immediately take on full dad and husband duties.

Honestly he really is quite perceptive sometimes.

So yes, I’ve got The Mum Cold. But Phil, well he has The Dad Cold. You know which is worse?
Neither.

We’re in it together, knee deep in snot, more fatigued than we thought humanly possible, both spending our days dealing with bodily fluids, our evenings wallowing in cold and flu remedies (of absolutely no benefit), snapping away at each other, firing out passive aggressive comments and willing the other one to get out of bed and respond to the child this time.

This is the side of family life they don’t warn you about, it doesn’t get put on an NCT leaflet, it’s not the front cover of a parenting book, it’s not reminisced over by parents across the land. This is the dark side. But this is what happens when you decide to breed sexually transmitted parasites. This is parenting reality, and we are lucky to have it. Although it might not feel like it right at this specific moment…

One thought on “The Mum Cold ”