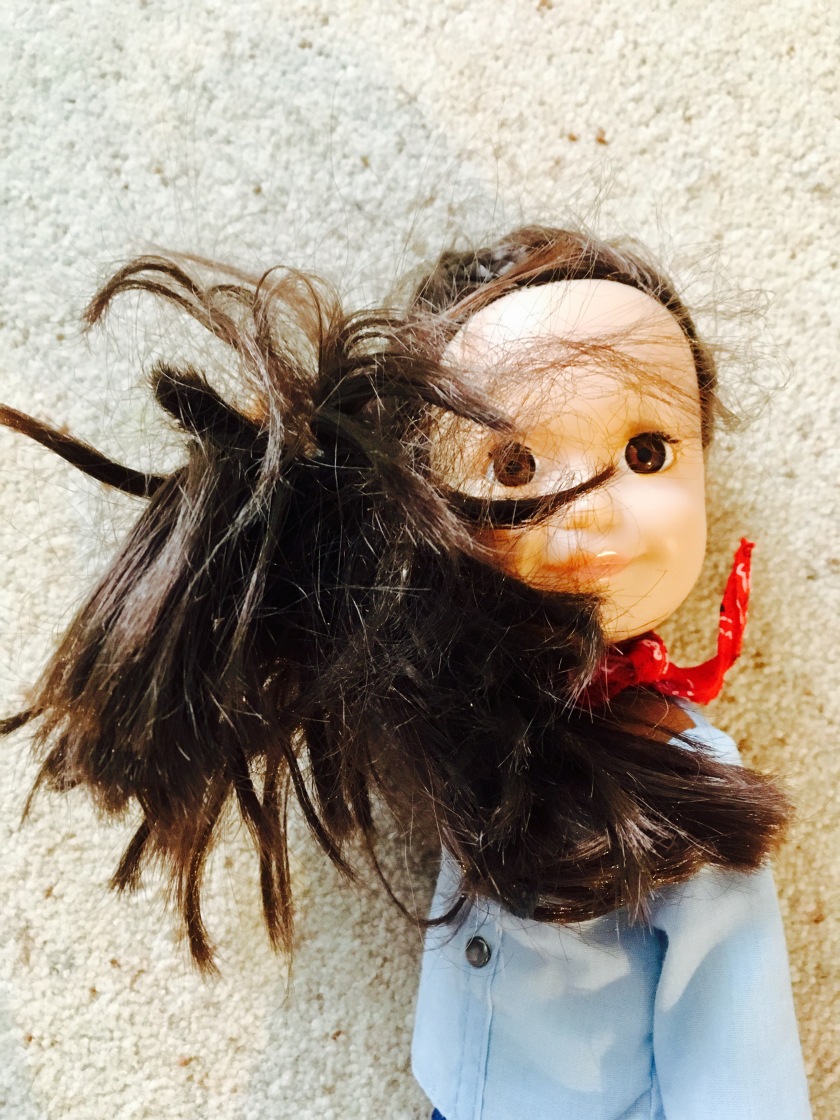 Today it’s Babysensory. The only baby class which The Boy gets to go to- being the second child. The Girl went to several in an effort to keep the ‘new-mum-me’ sane but now I take The Boy to just one – to alleviate the guilt of always partially neglecting him- this is his one hour of intense attention.

So the class is great but it is full of yummy mummies, the ones with their toned tummies, full face of make up, freshly washed hair and designer clothes. Needless to say I don’t really fit in with the particular aesthetics of this group, tucking my mum tum in to my Sainsbury’s jeans, on a good day I manage to wear a little mascara and because the class is at 9.30am my hair remains very much unwashed again today. So in an effort to make my sleep deprived self feel better in attending this class, I crack out the dry shampoo and then delve around in my make up draw to find some hairspray. I tip my head upside down and spray freely- confident can work the ‘just got out of bed look’.

Only to realise it wasn’t hair spray, it was Phil’s antiperspirant.

So not only do I look rough with lank and greasy hair, but I now smell like a man.

Watch out everyone- yummy mummy coming through…

Our drive is directly adjacent to The Deputy’s drive, with no fence or wall between the two (it’s that sort of a neighbourhood) so on occasion, The Girl may have wandered on to The Deputy’s drive, but generally we accept the little line between the well kept and frequently resurfaced tarmac, and the cracking, mossy, in need of repair tarmac, as the perimeter marker of each other’s estates.

So, imagine my surprise when I come home from the preschool run this lunchtime, turn in to the close, and discover The Deputy standing in the middle of my drive dressed astoundingly like a cheap imitation ghostbuster, in his brown boiler suit with an industrial sized leaf blower slung across his body, blowing away on my drive. Now, being as I am I smiled nicely and waited on the road while he scuttled around, dragging the seemingly endless flex of his blower off my drive. When I do finally manage to park my car on my drive I get out and look to say hello to The Deputy and await his explanation as to his presence blowing leaves on my driveway.

But The Deputy is nowhere to be seen. His bright orange flex is leading around to the far side of his house, and the deafening noise of the leaf blower still in action suggests he isn’t looking for conversation. Which is unusual. In fact this is the very first time in the 3 years we have lived here that we have both been outside and I have not been cornered for conversation. However, the relief of a clear run to my front door, at this point outweighs the suspicion.

Actually, I already know the explanation he will offer, as he has several times before been caught on our property, once before picking up the leaves on our drive his reason being:

“due to the prevailing wind being in a westerly direction”

Which is the direction of his house from ours. Hence, when we don’t keep on top of our dandelions it plays havoc with his lawn (yes, this was explained when he was asking me to weed our lawn “or at least just remove the heads before they go to seed.”).

But as it turns out the explanation wouldn’t work this time, as The Deputy was just blowing leaves, not sucking them up as he has done previously (and subsequently informed me with great pride of his actions). This time he was just blowing, blowing them away from HIS property and on to mine!! Hence him scampering off like a naughty school boy caught in the act when I arrived home.

Now, especially bearing in mind that we are lucky enough to be surrounded by trees on our estate, having leaves on the front lawn really doesn’t bother me. In fact it probably wouldn’t have even dawned on me what he was doing if he hadn’t avoided eye contact, blushed and hidden around the corner, but it matters to The Deputy. It really matters. This evening his lawn is impeccably clean.

Not a stray leaf in sight.

And all I can think about is quietly, under the cover of darkness, assisting the prevailing wind in its natural phenomenon of redistributing the leaves over that line on our drives. In fact I’m almost feeling childish enough to consider getting a rake out so that in the morning when The Deputy opens his curtains and surveys the street, he will find that not only has the pile of leaves he left on my drive been blown over on to his, but by some magical quirk of Mother Nature our lawn is leaf free.

The Deputy is our lovely neighbour; nosey, slightly over-bearing with far too much time on his retired hands but lovely. Called The Deputy (not to his face) due to his senior position in the local neighbourhood watch scheme and as such, he is concerned about all things neighbourly.

To put him in a little context, we live on a 1970’s cul-de-sac of 9 houses. Of the 9 houses 5 of these have only ever had one owner and are therefore occupied by OAPs. “The Originals” as The Deputy calls himself and the others who have lived there for 43 years, like to instil a sense of community. Or rather they like to know exactly what is going on at all times with everyone on the close.

Phil and I moved on to the close at the age of 29 with The Girl, then aged 18months.  One of the neighbours (who it turns out is nicknamed “The General and his wife” by one of our newbie neighbours) came to introduce themselves and were visibly surprised when laying eyes on us.

“Oh we were expecting someone more mature.”

I won’t lie, I felt pretty mature, what with being married, a mother, a doctor, now a home owner and living on a cul-de-sac. But sure, they were expecting more maturity.

So the other day The Deputy sees me pulling up to the house having successfully negotiated the preschool run and he nips out to ‘say hello’. Only it isn’t hello that he has come to say, he has come to investigate why I am driving Phil’s car. So I offer a brief and totally uninteresting answer explaining about it needing a service and it can’t do any more miles until the end of the month to avoid invalidating the warrantee. This is a phenomenon that the Deputy is unfamiliar with (being that his car is only used for a weekly shopping trip and an annual holiday) and so he hangs on my every word.

“Haven’t seen much of Phil recently…”

Hmm, now my cynical self is wondering if he is prying for knowledge into the state of our marriage, but giving him the benefit of the doubt I explain that Phil is just working long hours.

“Where is Phil based these days?”

So I explain that he is now at a hospital which is approximately a 30mile and 90mins round trip (a vast improvement from last years 52 mile and 2.5hour commute) and the job is busy. And, because I know what is coming next, I go on to explain exactly how busy, that he leaves the house at 7am and on a good day gets home around 7pm, but when on call (which is every Tuesday) he does 24hrs and rarely comes home at all, deciding not to risk driving so tired and instead sleeps in a grotty on-call room in a single bed with a plastic mattress (I do spare The Deputy some of the finer details). Oh, and one weekend a month he is on call too so rarely makes it home then either, for 3 nights in a row. With which I conclude my sob story and await The Deputy’s response.

“I couldn’t help but notice your front lawn is looking rather long….”

There it is. This is the bomb I knew he was trying to drop from the start. He wants our lawn mowed as he thinks it’s making the close look untidy. He has told me before that he doesn’t believe lawn mowing is a job for a lady, and he nearly died when he saw me mowing the back lawn with The Boy on my hip and The Girl helping me push (it wasn’t ideal but it was the situation I found myself in).

Now you may be picturing a lawn so unruly that you could wade through it like you’re on a bear hunt and would need a freshly sharpened scythe to hack through its dense undergrowth (in which case, perhaps reasonable to mention it). But actually it’s just a tad too long, it was mowed 3 weeks ago and sure, it could do with a little trim but it’s winter and I very much doubt that anyone else considers it an issue. So I’m a little tiny bit mad, and consequently I’m not likely to respond to this additional job being added to my to-do list in a positive or polite manner, so I don’t.

I don’t respond at all.

I just stand there.

Which is how I come to be sat in my lounge with the blinds closed, as much as I think I can get away with in the middle of the day, in an attempt to hide from my elderly, hunched over neighbour in a boiler suit mowing my front lawn.