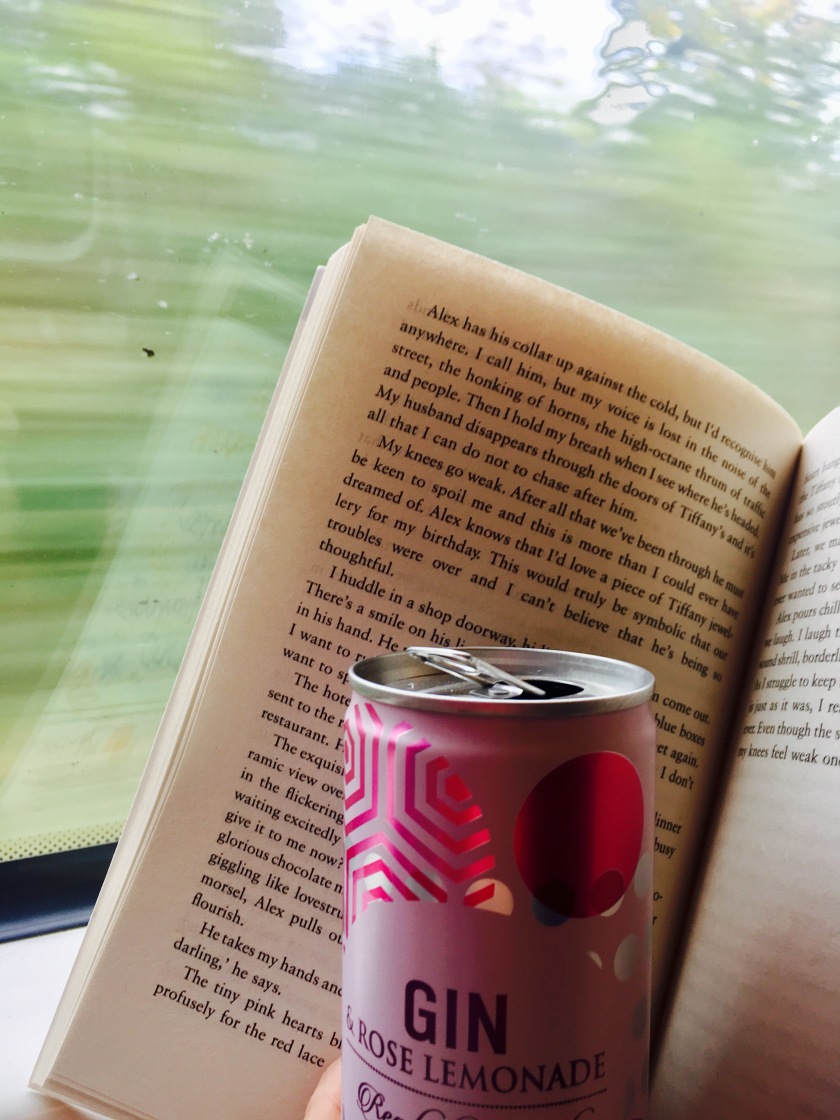 So I am on the train. I. Just me. Well and a train full of other people but none of them are my responsibility. There is just me and a classy can of G&T.

I’m heading to meet an old friend, to go out for dinner, have a conversation (maybe even finish it) and generally relax.

I have been excited about this for weeks and the really sad part is that I have been super excited about the train ride. Just a few hours of uninterrupted escapism watching the world go by, not being mauled, reading, listening and not actively being mum. I have planned this out, I booked a seat – forward facing and in the quiet coach, got my G&T, got my book, downloaded some podcasts. This should be heaven.

Only it’s not. The train was 30mins late. No biggie, had a little lunch at the station. But then I have boarded the train and it’s gone downhill.

Some overly affectionate youthful couple are canoodling while watching an episode of something on a phone, with no headphones in and the audio turned up antisocially high. Again – no biggie. This will not get me down. I will just pop my head phones in and ignore it….Only then I realise I forgot my headphones.

I look for my reserved seat, hoping that it will be a suitable distance away from said couple. It is. Only it has someone sat in it.

Now, this is sort of situation that makes me very British. Yes I reserved that seat. Yes I selected it especially for its forward facing window view. But no. I will not stake my claim. Instead I will sit on the only other vacant seat in the coach, just adjacent to said touchy-feely couple, which is also reserved. So I will not relax. At each station I will panic that the rightful owner of the seat that I am sat in will board the train and stake their claim forcing me to stand up – correctly evicted from the seat to find my own.

My initial thought is that I will obviously just ask the person in my seat to move. This will be fine. It will be clear I am doing it only because I was forced in to it. However, I look more closely as the thoughtless, rude, seat thief and realise that no, I am just too British. I cannot evict the sleeping 5 yr old from my seat.

Instead I glare at said child’s mother, who is also sleeping (I wouldn’t risk confrontation with a glare that might be seen) and resign myself to a journey of anxious unease resting on my derrière until I have to go stand in the smelly toilet vestibule.

Damn children. Who’d have them?!

We love my family. So much so, that we decided to spend the last couple of weeks of my maternity leave visiting my brother and his family in Texas. This was a decision we rushed into without too much thought. Because if we thought about taking a stroppy nearly 4 yr old and a hyperactive 11 month old on a plane…we wouldn’t.

The Girl had been informed that if you misbehave on a flight you get chucked off the plane by the pilot. She had taken this literally, believing she would be evicted mid-air never to experience the joy of aviation again. As parents, we took the executive decision to not correct this slight misunderstanding and as result she was golden. She had a split second where she looked like she just might flip into a world famous tantrum and I whispered into her ear the words:

“The pilot is watching you”

She immediately, silently, stood up from the aisle floor where she was prepping for the mother of all meltdowns, got into her seat and put her seatbelt on.

The Boy was happy as he had a few hundred faces to look at and shout “hello” to.

Fortunately when anyone acknowledged him he would give them his biggest, cutest, nose wrinkling, toothy smile and people would forgive him for the preceding racket.

The return night flight of 9 hours involved some sleep (for everyone but me, as The Boy was asleep in my arms, being that the bassinet would barely fit a newborn in – never mind a 20lb mobile, chunk of boy) but this meant I watched a whole film. The whole thing!

Admittedly I also spent 2.5 hours busting for a wee but unable to go as I couldn’t risk waking him up, but I found my continence 11 months after birthing a 9lb baby quite an achievement.

In fact what I thought was going to be a huge nightmare was actually almost a pleasure. There were several genuine high points to our journey.

The Boy at the gate was in my arms while our passports were inspected. He had just had a large drink. He was leaning over, out of my arms to shout hello in the face of the remarkably glamorous lady waiting to direct us towards the tunnel (which was right in front of us). He managed to get himself really quite close to her and she then leant in to speak to him. At which point he did the loudest burp I have ever heard him produce. It was like that of a grown man after a couple of pints. It came from deep down within him and had projection that Pavarotti would have envied. People in the surrounding area (which was a lot as we were waiting in line) turned to look, some too polite to laugh, others giggling quietly and others doing the silent shoulder shake laugh with tears in their eyes. This poor lady’s perfectly made up face recoiled in disgust as The Boy belly laughed hysterically.

I was temporarily mortified and speechless as I watched this beautifully presented woman pause and try to regain composure before reacting in the professional manner expected of her. And she did it:

“Well isn’t that just the cutest thing y’all ever saw?”

No. No it was not. It was smelly, it was right in your face and when all you were trying to do was demonstrate your child friendly approach to young flyers, it was rude. But you, you lovely Texas airport ground staff lady, are exceptionally good at your job. That was a great recovery. In fact you should probably be in healthcare the way you brushed over that bodily function demonstration. Because despite Phil and I being medical professionals we cried with laughter all the way on to the plane.

The second highlight was courtesy of another passenger. He had been sat next to us for the entire 9 hour flight and as we went our separate ways at the end of our brief but friendly acquaintance he said:

“Y’all have a beautiful family there. What well behaved kids, I would love this to be me in a few years.”

This was a big win, we couldn’t have been more proud of our little people. We managed to take two children on a long haul flight and not only did we not get evicted from the plane, we didn’t irritate the people next to us and in fact appear to have made a fellow passenger broody! We didn’t even have to drug the kids- just instilled the fear of death by ejector seat and it was a breeze!

There was a moment, just a little moment when, for the first time ever we thought ‘We’ve got this, we are doing ok’. We were feeling ever so slightly smug.

And apparently The Girl got wind of this and wanted to make sure that this feeling of knowing-what-on-earth-we-are-doing-in-this-bonkers-world-of-parenthood, was a fleeting one.

I write this at 2am having been back in the country 16hrs while The Girl is throwing a tantrum about the fact that when she shouted Daddy, I went to her room. The much awaited meltdown has occurred with constant screaming punctuated only by requests of ‘GO AWAY MUMMY’, ‘DON’T LOOK AT ME’ and other such gems being shouted in a manner reminiscent of The Exorcist. The Boy has then been screaming because he heard it was a good idea and now I can’t put him down until The Girl pauses for more than a second or else the whole cycle will start again.

Meanwhile Phil is trying to get enough sleep, in between negotiating with our 3yr old monster and googling ‘what the flip to do with a flipping out 3 yr old’, so that he will be functioning tomorrow for his 24 hour on-call.

Well, at least The Girl has achieved some consistency. We are back to having absolutely no idea what we are doing…